Most people who become parents usually put their lives on hold because of their babies. It can be as gradual as occasionally saying no to dinner invites and nights out. Or it could also be as abrupt as giving their 110% attention to raising their kids, which isn’t bad per se, but it can hurt their social well-being.

Of course, parents need to provide their kids with the love, care, and attention they deserve, especially during their early childhood development. But that doesn’t mean that they should be putting their entire lives on hold. They must also allow themselves to have a life outside of being parents for the sake of their sanity.

That’s why if you’re a parent and you want to travel the world or visit another city, don’t be afraid to do it. Allow yourself to chase after your dreams, but instead of doing it alone or with your partner, you can do it with your child as well. This way, you’ll be making once-in-a-lifetime memories together.

Try not to worry too much over how that can be possible. Traveling with a baby is much more challenging than if you were to do it alone or with your partner, but it’s not impossible. So, if you need help on how to make that happen, here are three tips that can help you pack for the trip:

Before you can pack anything for the trip, you’re going to have to know the details. After all, you wouldn’t want to come unprepared, especially since you have a baby in tow. That’s why you have to at least know the rough details of where you’re going and what you’re going to do there.

If you have a travel itinerary for the trip, it will be easier since you already know the fine print. However, if you don’t, you can just go over the activities that you’re planning to do and think of what you may need during them. It can also help if you know the weather conditions of where you’re going ahead of time.

Of course, you’ll also have to prepare enough clothes and things depending on the length of your stay. Don’t make the mistake of packing a limited number of necessities because you wouldn’t want to run out of clean clothes on your last day of the trip. It’s better to have spares than not to have enough.

You may think that your memory is dependable, but it won’t hurt to be sure. It will be difficult to forget anything once you’re already at your destination because you will have to spend more money. If you want to make sure that you won’t forget anything, consider creating a list of things to pack.

This includes your things and, of course, your baby’s items. It might be better to create separate lists though because it might get confusing if you combine everything on one list. So, your list will contain everything from toiletries to your gadgets and the outfits you’re going to wear during the trip. 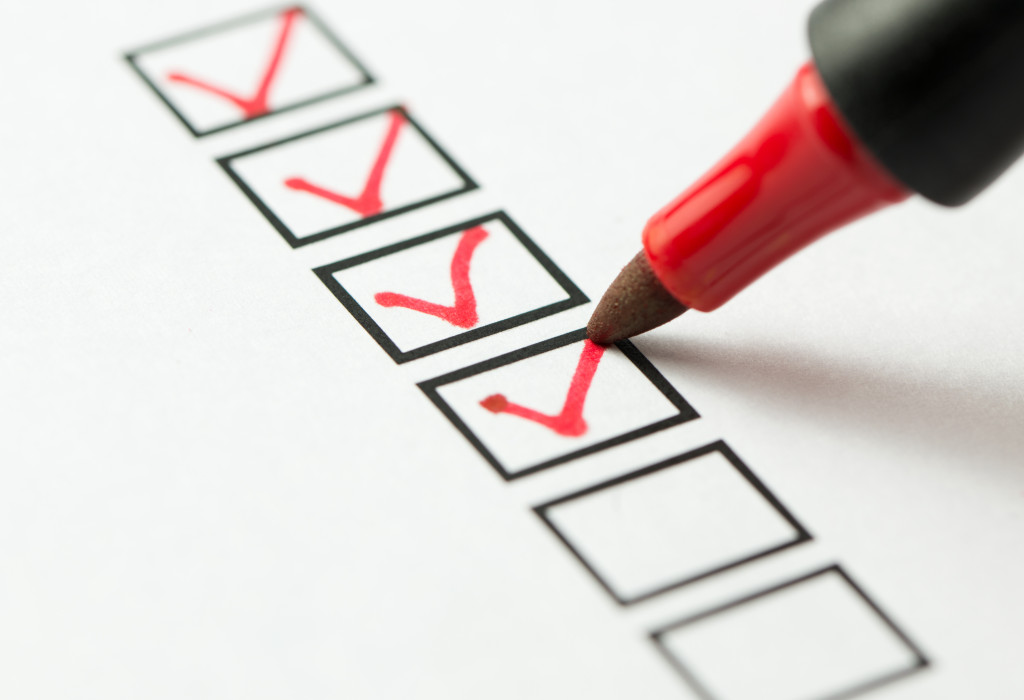 Then for your child, this can include baby clothing essentials, extra snacks, and your trusty lightweight swaddle blanket. You can never be too sure when you’re traveling with a baby, so it’s better to be prepared for the worst at every turn. But make sure that you’re not going overboard with your lists.

3. Pack Everything in Separate Bags

After making your list, of course, you’re going to have to use it. This is the time to whip it out and tick the items off as you go. This way, you’ll be sure that you won’t forget any items that you’re going to need for your trip.

It might be best to pack separate bags for you and your baby, so it won’t get confusing when you’re looking for specific items, such as your baby’s diaper changing pads or your sunscreen. That’s why after collecting the things on your list, you should deposit them into the luggage you’re going to bring.

For good measure, you might want to make a copy of your lists so that you can use them to countercheck your items after the trip. That way, you won’t make the mistake of forgetting your possessions in another city, state, or country because it would be harder to retrieve them when it happens.

Traveling with a child may be harder than if you were to do it alone or with your friends, but it can be a very memorable trip for your family that you can tell them about when they’re old enough to understand. Besides, you’re not going to be traveling with your baby all the time, so you might as well make the most out of every opportunity.